Informix: A Zest of Retro with the Latest Technologies

The story of Informix starts in 1980. Ronald Reagan won the presidential election against incumbent Jimmy Carter. A gallon of gas was $1.25. The relational database model, as defined by Edgar Codd, at IBM, was 10. Skylab disintegrated in the atmosphere just 6 months ago.

Roger Sippl created the company. Their first product, a relational database system, Informix (INFORMation on unIX), is released in 1981. In the 90s, Informix was almost as big as Oracle. The turbulent history of Informix is fascinating, but a major milestone was the acquisition of Informix by IBM in 2001.

Within IBM’s realm, Informix managed to survive and develop, despite the usual NIH (Not Invented Here) syndrome and a growing DB2 LUW (Linux, Unix, and Windows).

Today, Informix is still strong and kicking, used by great corporations like Visa, The Home Depot, Walmart, Synchrony Bank, DHL, Cisco, and many more. Informix was also released for the Mac. However, I thought that Informix was lacking a proper guide to get started on the Mac, so I decided to write one. 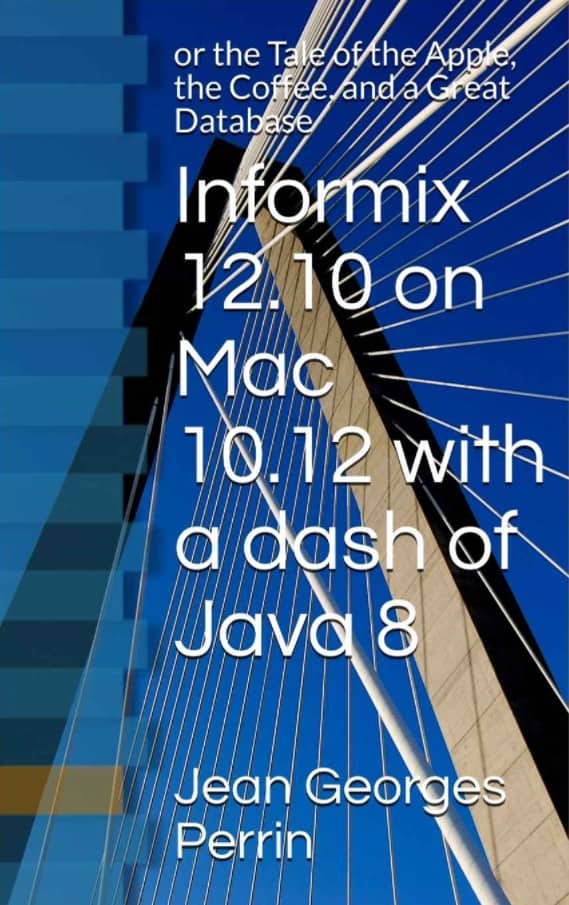 In Informix 12.10 on Mac 10.12 with a dash of Java 8 (or the Tale of the Apple, the Coffee, and a Great Database), I walk you through the installation of your favorite-to-become database server on your favorite machine, as well as installing examples and some administration tools. In the second part of the book, I cover the basics of Java development with Informix, using JDBC.

The book is released as an agile project: more chapters will be added (mainly in the Java section) and, after a few weeks of feedback, a print version will be available. Examples are available in GitHub, under an Apache 2.0 license, at https://github.com/jgperrin/net.jgp.labs.db.informix.

The book was released on April 23rd 2017, the same day the worldwide Informix conference opened its doors in Raleigh, NC. You can read it on your Kindle device or Kindle app. Get it at https://amzn.to/2oFyjhc.

Informix is the archetype of the Small Data that can become Big Data! Enjoy your reading.