ZooKeeper: A Real World Example of How to Use It

It is a universal fact that although Hadoop is becoming the standard for big data processing, it is still a struggle to get concurrency into it. While working on one such high throughput use case, “simultaneous read write” access to a set of files was required where there may be modification requests for files while the data is being also queried from them. Ah! this was an interesting problem to solve in the Hadoop world which does not have any “transactional” support per se. Essentially, the problem statement was to “provide simultaneous access for reads and writes to files in Hadoop along with some rollback capability”.

The way to attack the problem was to define a multi-version concurrency model which would also provide rollback capability to older versioned files. And ZooKeeper along with some application level logic proved to be the correct choice for the solution.

The design assumes that only one write can be executed at a time. However, there can be multiple reads simultaneously along with a single write. The steps in the design are outlined below.

The ZooKeeper nodes topology as per the design looks like this. ZooKeeper works like a filesystem starting with a root directory followed with several nodes (analogous to folders) and finally the data nodes (analogous to files). The circles in the image represent the name of a property/folder that we are trying to maintain and the rounded boxes are the values/files for those properties/folders.

So, the image above shows that the “global version” is 100 and there are 10 & 20 read requests being executed on versions 98 and 99 respectively and since there is a write request in progress, no other write request would be taken up until it completes. 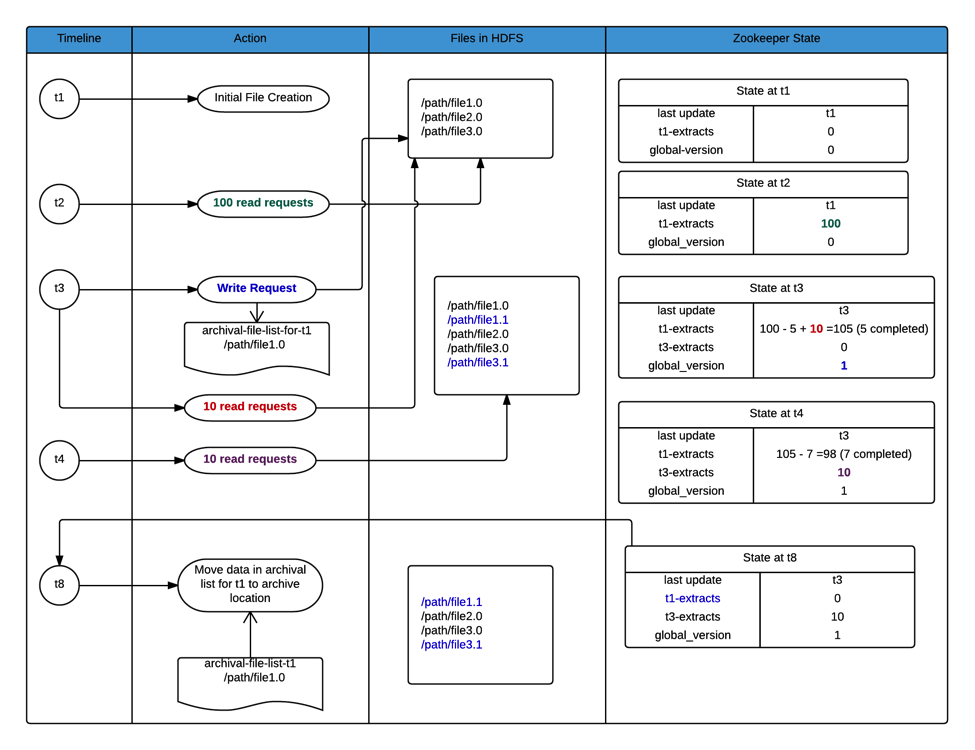 ZooKeeper advantages in the use case

To know more about ZooKeeper, please visit the following links :